Rob Cala Media
2012 Coachella. Mazzy Star to play (Hope Sandoval,Dave Roback) This video is 1993 on Conan. Simple fluid song. The voice and the shy handshake.
Netflix. Lillehammer. Mazzy Star. What?
Recently viewed the Netflix original program "Lilyhammer". Steven Van Zandt, of Bruce Springsteen & Sopranos fame, stars as a mob guy in witness protection. It's well written. And, it's subtitled. Smart. Takes place in...Norway. A bit later I was checking the line up for the 2012 Coachella Festival. Mazzy Star came up as reuniting for the gig. I liked "fade into you". Curious, I looked up David Roback, the guitarist/songwriter. He lives in Berkeley, California. And...Norway. Splits his time. Just an abstract observation.  A few weeks ago I watched a movie called Troll. Why you ask? Why not. A new look in offbeat cinema - creative film. It's Norwegian. Oh, speaking of suspension of disbelief. "Rubber". A tire, yep, TIRE named Robert gets really pissed off. A Park Ranger hipped me to it. Really. Don't tread on him. For some weird reason, it's actually a decent movie. 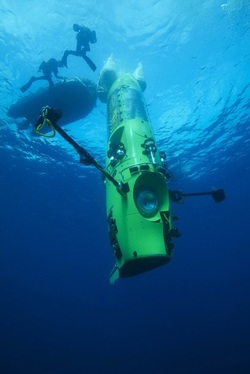 This February 2012 handout photo provided by National Geographic shows the DEEPSEA CHALLENGER submersible beginning its first test dive off the coast of Papua New Guinea. Earth's lost frontier, the deepest part of the oceans where the pressure is like three SUVs sitting on your little toe, is about to be explored first-hand. It's been more than half a century since man dared to plunge that deep. Earth's lost frontier is about to be explored firsthand after more than half a century. (AP Photo/Mark Thiessen, National Geographic)

WASHINGTON (AP) — Earth's lost frontier is about to be explored firsthand after more than half a century. It's a mission to the deepest part of the ocean, so deep that the pressure is the equivalent of three SUVs sitting on your toe.

And it's being launched by the rich and famous.

In the next several days, James Cameron, the director of "Titanic," ''Avatar" and "The Abyss," plans to dive nearly seven miles down in a one-man lime green submarine that he helped design. The location is the Mariana Trench in the western Pacific.Airline and telecom entrepreneur Richard Branson is not far behind. And former Google CEO Eric Schmidt is funding another deep water submarine project that's still on the drawing boards.

More people have been to the moon than to this place beneath the sea roughly 200 miles southwest of Guam. Only two people, Swiss engineer Jacques Piccard and U.S. Navy Capt. Don Walsh, have been to this underwater valley. And they spent only 20 minutes there. Their sub kicked up so much of the sea floor that all they could see out the window was a murky fog.That dive was in 1960 and no one has been back since. Unmanned subs have ventured that deep, but there's a difference between seeing something remotely on a computer monitor and being there, seeing it up close.

"It's the last frontier for science and exploration on this planet," Cameron said in a ship-to-shore interview with The Associated Press. "It's to draw public attention to the oceans and continued need for exploration as well as stewardship. It would be a good thing if we understand the oceans before we destroy the life that's in them."

Cameron plans to spend at least six hours on the bottom in his cramped, almost form-fitting sub, Deepsea Challenger. He plans to film an undersea documentary with his partner National Geographic, including 3D footage.
Craig McLean, chief of research for the National Oceanic and Atmospheric Administration, calls Cameron a hero.
"This is an awakening for the public on how little we know about our planet," McLean said. "We don't have to look up in the sky to find what's out there. We've got it in our oceans."

Andy Bowen, director of the deep sea sub lab at Woods Hole Oceanographic Institution, remotely guided the unmanned Nereusto the same sea floor for 13 hours in 2009. He describes the pitch dark, icy cold place as "the most hostile, most remote environment on the face of the planet."
McLean said the 16,500 pounds-per-square inch pressure isn't bone-crushing, "it's obliterating." Cameron said if there were a leak, the pressure would crush him so fast he couldn't even cry out.

But getting to that dangerous place, Bowen said, "is frankly intoxicating."

Cameron already feels the majesty and he hasn't been quite that deep yet. Last week, on a test dive for his 12-ton, 25-foot vertical sub, Cameron went to a different trench 5.1 miles down. That set a record for the deepest solo sub dive and Cameron was mesmerized by deep sea anemones that looked like hanging gardens, tube worms and jellyfish that would pulse by.There was a moment when Cameron was photographing a jellyfish that swam right in front of his viewport, backlit by special lighting techniques.

"I just saw this very ancient and very simple animal," Cameron recalled. "The thought that popped through my head was that God must have been proud the day that he created the jellyfish."

And, Cameron added, he's an atheist.

Cameron's plan for the deeper dive depends on calm weather and pinpoint timing to conserve battery life. In 1960, Walsh and Piccard took nearly five hours to reach the bottom.Cameron said his plan "is to scream to the bottom as fast as possible, then work at the bottom with all lights blazing." His descent in the dark, slightly-above-freezing water will only take 90 minutes and technically there's enough life support for a 56-hour dive. Cameron won't say how much the expedition costs.

While it may seem desolate — it's too deep for traditional fish to survive because of the pressure — there is life. Ravenous little shrimp-like creatures, sea anemones, worms with bristly feet, and sea cucumbers live in this section of the trench called Challenger Deep, said scientists on the Nereus team at Woods Hole.

"Exploring the trenches is a view back in time because they are so isolated from the ocean and circulation," Woods Hole submersible chief Bowen said. "It's inevitable that it's going to reveal something about the biological history of the planet."

Back when Don Walsh, now 80, took the plunge, he and Piccard saw sparkly tiny fish in the dark that glowed like light reflecting off snowflakes. He could hear sea animals outside. But once the ship landed and caused a dust-up in the fine flat oatmeal-colored bottom, he could see nothing.

"It was like staring into a bowl of milk," said Walsh, who is in Guam with the Cameron expedition.

Cameron won't be alone in trying to follow Walsh. But the next up is likely to be Branson. His company last year bragged that it's been to all seven continents and is going into space, so a $17 million sub venture is the next logical step. Google founder Schmidt is helping fund a $40 million effort by California-based DOER Marine to work on a more science-oriented human deep sea sub that is at least two years away. Also said to be in the hunt is Triton Submarines in Florida, a firm with no celebrity connection.

While some people call this "a race to the bottom," DOER Marine's president Liz Taylor said this is far more collegial."What we really have is a race against time in terms of what humans are doing to the oceans," Taylor said. Oceans provide most of the world's oxygen.

"Basically it's our planetary life support system at stake," she said, "and we're treating it as a supermarket and sewer at the same time."

NOAA's animation of diving into the Mariana Trench: http://bit.ly/AxD364