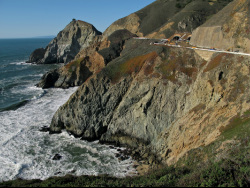 In 2013 this awesome stretch of Northern California roadway will be permanently closed to traffic.  The CalTrans double bore tunnel project will be complete, linking Pacifica with Montara. Though the years saw many landslides and occasional accidents, it is an easy access adventure. The early 20th century introduced the Ocean shore railroad running this stretch until the slides became too much. Getting our drive on, Canon G12.

"Keep your eyes on the road, your hands upon the wheel" 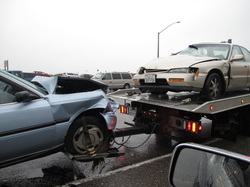 Raw footage of a rain slicked road after a closure for a head on collision. This is not a slice of California's highway 1 that lets you off easy if you fail attention at the wheel but it is/was a fun drive. A dramatic part of a coast drive soon to be a double bore shotgun through a mountain...
Northbound
Southbound
Just north of Devils Slide. GoPro and an incoming tide. This is the "Tsunami" we experienced in NorCal after the earthquakes in Japan sent waves across the Pacific.